The community of El Bario

The community of El Bario is located in canton Platanares within the municipal jurisdiction of Suchitoto in the department of Cuscatlán. Suchitoto was one of the three areas that was most affected by the civil war in El Salvador. Much of the rural area of Suchitoto is located on the skirts of the famous Cerro Guazapa(Guazapa Mountains) a guerilla stronghold only some 30 miles from San Salvador. The repopulation of El Bario in July of 1986 was one of the first organized during the civil war at which time the area was still considered an active war zone. Despite this the people of El Bario returned to their lands and lived under constant attacks and abuse by the government forces from 1986 until the end of the conflict in 1991.

Carmen Broz our project founder accompanied the repopulation as one of the many members of a SHARE Foundation caravan. The delegation was detained by the Salvadoran armed forces in the village of Aguacayo about 3 miles from El Bario. After 3 days of negotiating only one member of the delegation was allowed to accompany the 64 returning families and the donated building and food supplies. The rest of the delegation was detained another 3 days and then taken to the Guatemalan border where their passports were stamped “Persona non Grata” making it impossible for them to return to El Salvador.

After her passport was lost, Carmen applied for a new one so as to be able to return to El Salvador. Carmen returned to El Salvador in 1989 and contacted the leaders of El Bario to see where aid was most needed. At that time malnutrition especially in the children was a priority. Our first support included paying a pediatrician and gynecologist to provide monthly check ups, training in the use and production of soy beans, helping to start a day care center and support to the small school at which time only was for 1st-3rd grade.

El Bario is the largest and one of the most organized communities in the area and is considered by the city to be a center of the zone. The community now consists of more than 225 families and has a population of about 1200. Since 1995 our support has been directed 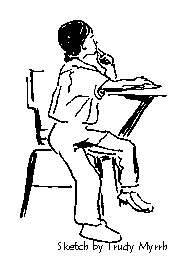 specifically in the area of education. Over the years we have paid teachers’ salaries, provided vocational training in sewing, baking, cooking, computer maintenance and electrical installations. We have also provided school materials and books for the library and school. One of our largest expenses for many years was paying the salaries of middle and high school teachers, now all of these costs our covered by the ministry of education. The school in El Bario now provides K-12 education and receives students from 7 surrounding communities, the alumni population in 2017 is around 450.

In 1999 when the first students from El Bario graduated from high school and came to Carmen to thank her for supporting them, a question was brought up. What now? Carmen knew that without financial aid it would be virtually impossible for these 9 young and bright students to continue studying. This same year we began our university student loan program, providing no interest loans to students that had attended the school in El Bario. Students may repay their loans through social or communal work, paying the costs of higher education for a younger sibling or repaying the amount they received in small monthly payments. Since the university student loan program began in 1999 we have supported around 120 students in their efforts to obtain higher education. Now in 2017 we have 100 graduates and 17 students studying. Each year between 2-6 student graduate from universities and technical schools. Our university loan program although started in the community and school of El Bario now accepts applications from high students from 5 other high schools in rural Suchitoto as well as from students from rural communities that study at the High school in town. We also provided support up until 2013 from the communities of El Gigante, Sueños en Jocoaitique in Morazan where our work is coming to an end and Dolores Apulo where because of other problems we have not received applications for our university program for several years.

Needs in at the school in El Bario always include: funds to buy text books for the school library, equipment for the poorly equipped high school science lab, laptop computers for the computer lab and a general fund for teachers and school supplies. They welcome volunteers for teaching English, individual tutoring in math, science and Spanish grammar and for aid in the detection of learning disabilities in K-6th grade students.

The agricultural cooperatives of El Gigante and Sueños en Jocoaitique

In 1991 some of the future founders of the Cooperative El Gigante heard news of a woman (Carmen Broz) who was providing support in other parts of El Salvador. Among these men and women were many who had recently returned from refugee camps in Honduras and at this time were living in the northern part of Morazán and were desperately seeking aid. In the first meeting, close to Perquin another stronghold of the left wing guerilla troops, Carmen was scared at first as some of the men were still armed. Slowly she told them that she worked only with organized groups because the needs in El Salvador at that time were so great that she could not consider helping individuals. The men and women not at all worried said "OK we'll be in touch once we have organized."
Carmen did not hear from the people in Morazán until early in 1993 when some of the same men came to visit her in San Salvador and now legally organized as the Agricultural Cooperative of El Gigante. The cooperative formed by some 60 members and their families is located only 1 mile from the city of Perquin in the poorest department of El Salvador, Morazán. Because members of the cooperative El Gigante obtained agricultural lands under the peace agreements in two different cities, they were forced to form another cooperative in Jocoaitique some 15 miles from Perquin. So by 1995 the two cooperatives “El Gigante” and “Sueños en Jocoaitique” were now operating each as its own legal entity.

Since our support started in Morazán we have provided medical exams to women and children, books and furniture to the community libraries and day care centers and scholarships to 3rd-12th grade students.

In 2001 our first eligible university students entered our student loan program and by 2007 we were supporting 6 students from the two cooperatives. Since 2009 we have been renting a student house in San Miguel where most of our students from this area live during the week. Now in 2016 we have aided most of the youth from both cooperatives in their university studies and this year we continue to support the last student with financial aid for her university studies, she is from the El Gigante Cooperative. In 2015 we closed our student house in San Miguel as only two students were using it in 2014.

In 2006 project AGE was started providing reading glasses to seniors, the project combines training in the making of local handicrafts and social activities with our high school and university students. Although project AGE started in Morazán it now continues annually in the rural parts of Suchitoto where most of our efforts continue.

In 1998 Carmen was contacted by Sister Monica Thieblin a French nun, who had been working in marginal communities in the area of Apulo for many years. Apulo is an urban community only 20 minutes from San Salvador, and is located in what could be called a tourist area for Salvadorans. In their first meeting Monica asked for financial aid for 4 high school students from very poor but socially active families. Carmen asked the question of why should we invest in these particular students and was answered by one of the more active local leaders, Marta. Marta explained to Carmen that the only future for most of the young women of this area is prostitution, still legal in many parts of El Salvador. She continued to explain that what they wanted was to train future community leaders not professionals. Well it was these words that convinced Carmen to take on Apulo. Since that time Marta has passed away and 9 years ago Sister Monica turned over her supervision of our support to a newly formed women's association. Three members of the association Fran, Mirtala and Margarita are now active members of our local committee. The Communal Association for the Poor Lake Water Area (Asociacion Comunitaria para los Pobres de la Cuenca del Lago, ADECOI) now not only supervises our funds for high school scholarships but also manages funds from other donations in a K-9th grade scholarship program for some 45 children, sons and daughters of their members. They also now have 2 barter stores in the area where anything from shoes, CDs and beans to services in computer repair and babysitting are exchanged by men and women in Apulo. Since 2009 ADECOI has been working hand in hand with several local groups providing weekend tutorials and school supplies to over 120 local youth.

Since Palo Alto Friends Meeting El Salvador Projects started supporting this Christian based community in Apulo we have helped 12 high school students to finish their schooling. Also we have also supported at a higher level 1 nurses aid and 2 registered nurses to finish their advanced studies. Due to high gang activity as well as other social problems in the area our support to high school students was ended in 2009 as it is now almost impossible for students to attend the high schools which are now almost completely controlled by gangs. The situation was so bad in 2012 that the other programs for youth that the Asociacion provided on weekends were suspended. Problems with crime and gangs continue to plague Apulo and all programs were suspended in 2014 as both youth and local leaders were threatened by local gangs. We are hopeful that in the future the situation will improve so that we will be able to continue working with the ADECOI community group.